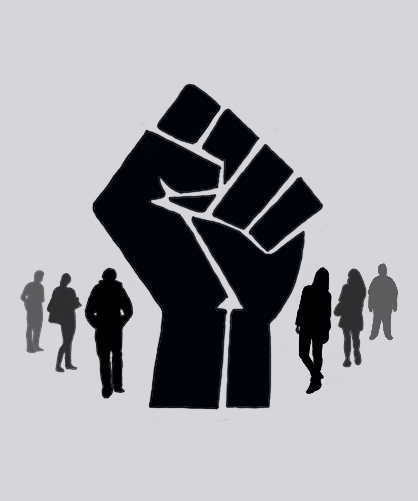 In the wake of the Black Lives Matter movement, experiences of Black students in SRVUSD often go unheard.

Racism is a persistent problem all over the country, considering there is no succinct way to address it. As perfect as SRVUSD schools may seem with the stellar grades, strong sports programs and multitudes of clubs, systemic racism often hides in plain sight. Students of color, specifically black students, experience racial prejudice in many forms.

Some examples include the use of the “n-word” by those who are not black, the use of racial and derogatory slurs towards others in a classroom setting and more. Some refer to these actions as a microaggression. A microaggression is defined as a direct or subtle action, statement or incident, that targets groups of racial or ethnic minorities.

Monte Vista High School Black Student Union co-presidents Sydney Wanguhu and Adanna Ogu spoke to the Tribune, explaining the realities of day-to-day life. “Racism is a thing everywhere, you can’t escape it. But I don’t think there are blatant forms of it, there’s more microaggressive racism that comes from a naive place. Most people who are racist or microaggressive, they’re more naive and don’t understand what they’re doing or they’re taught that way.”

Ogu described how she has lived in San Ramon her entire life, and was told she looked unrecognizable when her hair was flat-ironed rather than her natural curls. “I was asked where I was from, out of nowhere… told that I have a flat lip…called an oreo,” and emphasized how all eyes fell on her in a classroom when Black history was mentioned.

Wanguhu elaborated how when she wore her hair in braids, she was told that “braided hair looked ‘ratchet.’” Her classmates asked her why she “wasn’t over slavery” and “why does it bother you?” She explained how she feels “like it’s ignorance more than anything,” but it doesn’t erase the pain, it’s what Black individuals have to “endure through our lifetime. It’s just a matter of how I handle situations.”

Ashraf Abdelmagid, a current senior at Dougherty Valley High, has experienced different forms of racism at school. In his sophomore year, three students came up to him, handed him a banana and correlated it to Africa. When he attended Gale Ranch Middle School, he was called multiple times to the office for incidents he did not commit – with the possible consequence of a suspension.

“People think our school is diverse…since it is mostly made up of Asian Americans, they make it seem that racism can’t exist. They think that because it is a white-majority school it can’t be racist just because they are minorities, [too],” Abdelmagid elaborated, almost an allusion that racism is gone.

Abdelmagid went on to explain how because of the socioeconomic status of many students at Dougherty, it often blinds those who are well-off while further disadvantaging those who aren’t as well off. “Specifically at Dougherty, it’s definitely more of a socioeconomic problem because most students are super well-off while the rest are just aren’t as privileged.”

It is not just Abdelmagid – other students have experienced racism as well. Dwayne Davis is a former Dougherty Valley High student who transferred to Mcclymonds High School, a school in the Oakland Unified School District, during his junior year. Graduating from Mcclymonds in 2020, he now attends Cal State Los Angeles.

Davis articulated the stark differences he saw as a black student initially attending Dougherty Valley in San Ramon, then attending Mcclymonds in Oakland. “[At] Dougherty, a lot of the staff couldn’t relate to the students of color and relate to you, especially when it comes to your upbringing. There was a cultural shock coming to the Oakland school district. I didn’t know what to expect, as all of the teachers were black and had experience in the teaching.”

Additionally, Davis explained how he once caught a group of non-Black students saying the n-word, making fun of him and using derogatory slurs at Dougherty, emphasizing why it’s not right. “I was at a dance show after I left because all my friends were there. I was sitting with my friends and family and there was a kid behind me of Korean background and he was saying the n-word. Anyone who is non-black should not use the n-word.”

Other black students at Dougherty have taken the time to draw attention to students using the n-word when they are not Black themselves. For instance, a Twitter thread was started by former DVHS student Tiana Day, in which many Dougherty students were publicly called-out for saying the n-word, posting videos, text messages, and other screenshots as proof.

Davis commented on the thread, emphasizing how the videos were not posted with the intention of tearing others down for no reason, but rather reflected a hateful message as these words should not be said in the first place regardless of the intention. “People say that she was exposing them, but really what she was doing was raising awareness that there is racism in our school and in front of our faces.”

Such experiences are pervasive but are usually not limited to the classroom. A black anonymous SRVUSD alum explained how certain childhood experiences — adverse childhood experiences (ACEs) — shape people’s lives, often causing fear and trauma. According to the CDC, ACEs can have “lasting, negative effects on health, well-being, and opportunity,” and ACEs often disproportionately affect certain minority groups such as Black individuals.

“When I was three years old I was babysat by an older step-cousin that sexually abused me until I was ten. I spent my whole life suppressing these memories and I got into a lot of trouble growing up. I noticed I was always intrigued by risky activities. I realized that this behavior was a result of my unresolved childhood trauma,” the source elaborated.

Additionally, the results of these adverse experiences can show up in the classroom. “No one going to school with me would’ve known this because I never talked about it. We’re all going through something. We need to be honest with each other and open up the conversation about ACES to build a support system within our students,” said the source.

These are experiences of only some Black students, there are likely plenty more in SRVUSD. However, SRVUSD articulated that they are attempting to take steps to help students of color. SRVUSD’s Board of Education passed Resolution No. 95/19-20 Denouncing Racism, and Supporting Equity, Safety, and Well-being of Black People on June 29, 2020.

Christopher George, the Director of Instruction at SRVUSD, commented on the resolution. “We are aware that [racism and equity] is something that the district is always working on,” clarifying that their efforts have accelerated since 2013. One example is Courageous Conversations, a program adopted four years ago, where teachers are trained on how to facilitate discussions about racial disparities and inequalities.

Ashlee Gutierrez, the Equity Director at SRVUSD says her role is defined as she goes. She wants to create a plan that allows students to flag incidents of microaggressions, restoration for victims of harm, and definitions of responsibility. She wants to make sure that principals have the training, leadership, and resources to respond. She wants to make a “stop hate” website, where incidents of hate crimes can be reported.

“At the end of the day, we are a school and it’s our job is to educate,” Gutierrez remarked.

Regarding the equity resolution, she feels that, “It’s the first step, and it’s an important one. But the most important part is what happens next. The next thing is we need to fund it and make sure folks listen to kids, teachers of color, and make room in the budget.”

Abdelmagid acknowledges that SRVUSD is taking steps and feels that truly building equity in SRVUSD is an intricate process that will take time.

However, MVHS BSU co-presidents Wanguhu and Ogu highlighted that conversations surrounding race must be encouraged from an early age through a variety of forms, no matter what any institution is attempting to do to combat the problem.

Ogu, speaking from her own experiences, clarified that “children’s minds are super malleable at a young age,” she learned from her dad at the tender age of four. “It’s so important that we start to educate children, they are a lot smarter than we think they are and learn fast.”

Wanguhu added on to Ogu’s remarks: “My little sister asked me when Trump was running for President, ‘don’t you have to be black to be president?’ If you teach these kids to love at a young age, all the ignorance will stop.”