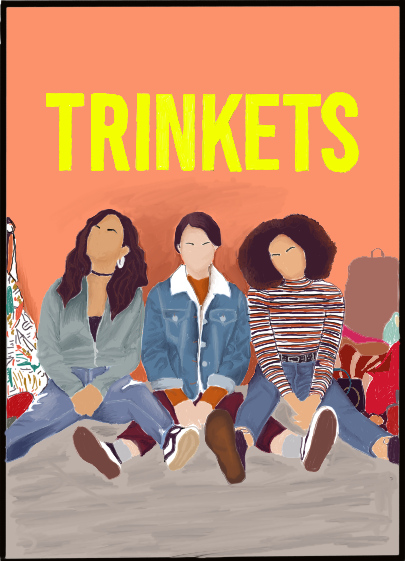 The Netflix show “Trinkets” is about a group of three girls, Elodie Davis (Brianna Hildebrand) the shy girl who likes music, Tabitha Foster (Quintessa Swindell), the popular, rich girl who seems to have it all, and Moe Truax (Kiana Madeira), the alleged rebel, who meet and become friends at their shoplifters’ anonymous meetings. “Trinkets” discusses taboo topics, develops its characters well, and is able to capture the audience’s attention. The second season of the show leaves no cliffhangers and ends the show on a high note, which makes it binge watch worthy.

The show follows them through their junior year of high school as they deal with their personal problems, drama and struggle with their shoplifting addictions. Elodie moved to Portland to live with her dad after her mom died, while Tabitha and Moe used to be friends when they were younger.

When a second season for the show was announced, it was also announced as the final season of the show. While this upset some viewers, in the end, it is better that the writers and everyone producing the show knew that they would only have one season to wrap up the show.

The pace of the show is fast, but this helps keep the watcher entertained. Many of the characters fight, get in new relationships, break up, and make life changing decisions in a matter of minutes. This doesn’t make the show hard to watch though, as these progressions seem natural and are hinted at before they actually happen.

Compared to the first season, the second season covers more content, and therefore, every character and their situations change constantly. While the first season shows the life of Elodie, Tabitha, and Moe during their first two months of junior year, the second season encompasses many more months, and ties up all of the many loose ends that were left behind during season one. I think they were able to use this second season to their advantage. Besides only completing plotlines, they developed the plot of the story. For example, I think they did a good job with Moe. They showed more of her strained familial in the second season, and showed how that related to her addiction, while also concluding it with an intervention.

The character development of Elodie, Moe and Tabitha was phenomenal throughout the second season. While the first season led us through the early stages of their relationships, establishing the problems in the series, the second season dealt with fixing the problems once and for all and solidifying the relationships. Elodie went from stealing to cope with the loss of her mom to returning everything she stole to be a better influence for her younger step-brother and ended up having a healthy relationship with her family. Tabitha learned more about accepting her family’s situation and about romantic relationships. Moe was on the path to fixing the relationship she had with her father and with her boyfriend. Their characters are starkly different at the start and end of the series, which is refreshing to see. They all ended up getting their own version of a happy ending after going through what they did.

The situations the characters are put in are strange and unrealistic for the average person, but that makes the show interesting to watch. There are many scenes where the main trio steal at stores, together, or by themselves. These scenes are built up to be intense, but to highlight the ease that Tabitha and Elodie feel while stealing.

While the show had its dramatic moments, it has its fair share of heartfelt moments, and moments that empower the characters. The main focus of the show is addiction. Tabitha and Elodie struggle with a shoplifting addiction, while Moe also has an alcohol problem. The show discusses their struggles, but also addresses the road to recovery. This makes the show much more uplifting than it seems to be at first glance. The show also highlights Tabitha’s relationship with being a shoplifter, while also being a Black woman in America. This was a good addition, as it highlighted a pertinent social issue in the context of her character. All three of the main characters have problems with their families throughout the show. While the relationships are never perfect at the end, it is heavily implied that they are in a much better place than the start. This realistic portrayal adds to the uplifting feeling without seeming cheesy.

The show deals with many topics that are considered taboo in TV shows, from LGBTQ+ representation to the subject of domestic abuse. Elodie, who is gay, starts of the second season with Sabine (Katrina Cunningham), the rockstar, and ends with Elodie in a healthy relationship with someone her own age, Jillian (Chloë Levine). I liked that one of the main characters was in the LGBTQ+ community, rather than only a side character. There were also LGBTQ+ side characters in the show, but it’s nice to see that that is represented in the main character. I also liked that the relationship that Elodie ended up with was healthy with someone her own age. At the end of season one, I thought they were going to leave her with the 21+ (Elodie is a minor in this series), self centered Sabine, but I’m glad that they didn’t do that.

Brady (Brandon Butler), Tabitha’s ex-boyfriend and main antagonist throughout the series, is abusive and manipulative. The end of the season deals in a satisfying way, that makes sure that he loses in the end and doesn’t get what he wants. Tabitha heals from this relationship, which is reflected through her character development. These people and issues are usually not represented or discussed in shows in a way that shows healthy relationships and growth. I like that they tackled this issue in a way that did not glamorize it, and acknowledged the trauma of the victim. This is one of the many things that sets Trinkets apart.

In general, I recommend this show. Even though I was skeptical of it because it was produced by Awesomeness TV, who I think generally make not so great content, I was surprised by how much depth this show had. The character relationships are great to watch unfold, there is an ample amount of drama that takes place, and important issues are highlighted.