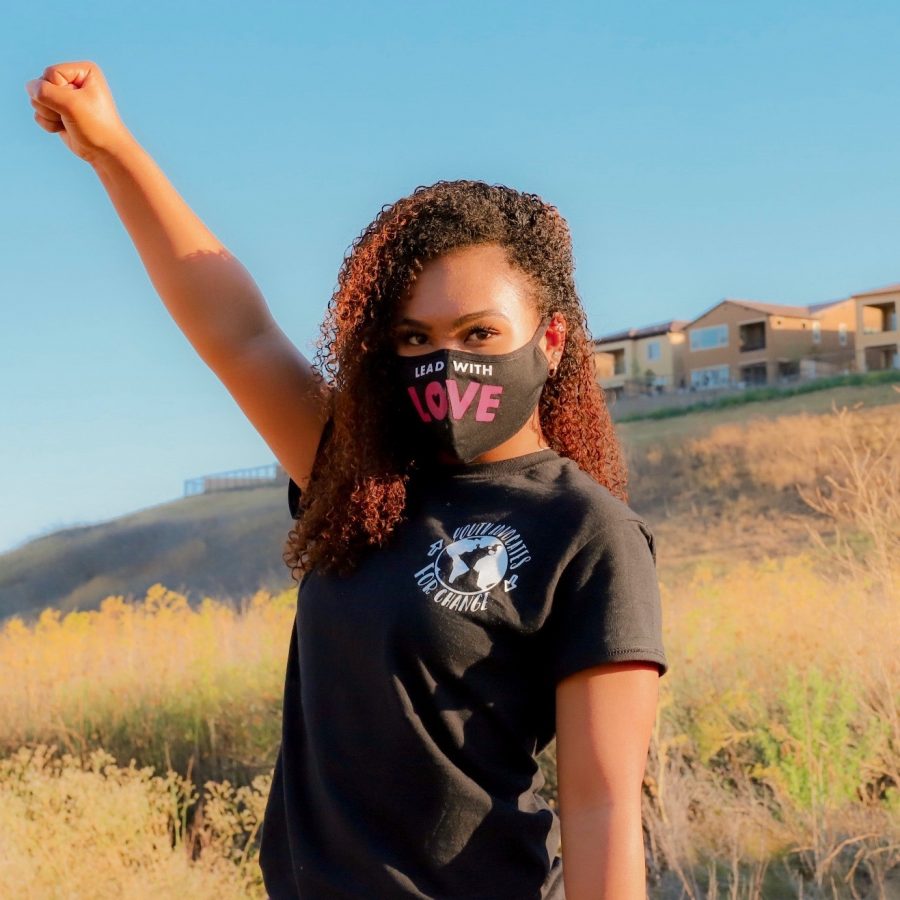 Dougherty Valley High School alumna Tiana Day ('20) led a protest and started a nonprofit to bring about change in her community.

The Black Lives Matter movement started marches across the country, made national headlines and positively changed the political backdrop of the United States, immediately following the death of George Floyd at the hands of a white police officer, Derek Chauvin. Protests were held and petitions were signed. Many of these protests and petitions have received attention by young activists, particularly teens.

Tiana Day is one of them. In a New York Times article, she said that she “was never really an activist before. But this movement lit a fire in [her].” The movement inspired her to lead a large protest on the Golden Gate Bridge on June 6, attended by thousands.

And she planned the event in less than a week.

“I was walking and scrolling through Instagram, and someone [Mimi Zoila] said that they had a permit for the Golden Gate Bridge [protest] and they needed someone to help lead a protest there,” Day said. “I’m very spontaneous, and I’ve never met her in my life. We set everything up…by the time we walked under the bridge to the other side, we saw how many people were there.”

“At the end of the day, just seeing the love, everybody coming together, was just the most beautiful part of it,” Zoila, the co-coordinator of the Golden Gate protest, said.

Just four days before the protest, Day started a Twitter thread, intending to bring awareness and hold other individuals accountable for using racial slurs in a multitude of settings. The thread included current and former Dougherty Valley High School students who were not Black casually using the n-word, displaying videos, images and text message screenshots from old social media posts or stories.

“I had a close friend, and I helped her make the cheer team, and it tore me to shreds,” Day shared about her former friend who said the racial slur on social media. “I know she isn’t racist, but she is not educated and it makes you look racist.”

At Dougherty Valley, she felt the weight and pain of racism from teachers and administrators.

“We were always getting in trouble, the admin would always follow us, teachers would know our names because we would ‘look hard,’ [like we were] ganging up on other students, when in reality we were all having a major identity crisis,” Day elaborated. “All the kids who are getting in trouble—it’s not because they are bad kids. They’ve all had so many terrible experiences that we don’t know about, stories no one shares and stories no one listens to.”

She shared one of her stories, regarding a specific incident with a teacher.

“It felt like she was always attacking me and the Black kids. We had the worst problem with authority in that class; we would gang up on her all the time, we would cuss, throw things etc., because this teacher was always attacking the Black students,” Day stated. “When you make someone feel threatened, there’s like a ‘fight or flight response’—most Black kids feel like they want to fight it and stick up for themselves. This is all we know.”

Making a connection from her personal experiences, identities and peers, Day elaborated, “I’m starting to realize that a lot of my friends have gone through similar experiences but you would never know, and I have started to realize that most of the Black students in this community have faced some adverse childhood or experience that will put them at risk.”

“There is no talk of mental health, it’s kind of like you go, go, go, you must be tough because society has this idea that all Black people are tough and are criminals [and] we are hard,” Day explained. “We are taught by society that we have to act that way so we can’t be weak.”

Much of Day’s inspiration comes from her father, Tiayadi Day, who showed her the strong person she could be and worked extremely hard in order to get to where he is now.

“My dad works five jobs. I live in San Ramon, and I live in a $1.3 million home and it’s because my dad works five jobs. My dad literally goes out at 6 a.m., works multiple jobs, and comes home at 2 a.m., and that’s my inspiration. And he grew up in Richmond. It’s not a safe area. He worked his butt off, and people see me one way,” Day shared. “I was always getting in trouble, and I can recognize who to get close to and why.”

Her father is proud of her, finding that they have lived the injustices faced by the Black community.

“I’m blessed to have my daughter. I didn’t teach her the struggle. I guess we just lived it,” Tiayadi Day said.

Despite the struggles and social injustices she has faced in her life, she is grateful that she has this opportunity to make a change in the world. Day’s activism streak is akin to her grandfather’s, who was part of the Black Panther Party movement himself.

“People will think negatively once I say this, but there needs to be some type of rioting in order for change to be made. My pain is generational, and I never realized that. I’m thinking this came out of nowhere, but it’s actually been something my family has been fighting for so long.”

Many times, Day has felt that the media has portrayed her through the wrong set of lenses. Instead of being known as the 17-year old girl “hero,” she wants to be known as an advocate who is genuinely making a change.

“How the media portrayed me was a very watered-down version…yes I am 17, but I have so many things I am working on right now and I need to be taken seriously.”

Day will be featured in an upcoming documentary by Vice News, documenting her day-to-day life, like her work with her nonprofit.

“They are going to come by my home and film my day-to-day…documenting the whole startup of the nonprofit and all the meetings I will be doing,” Day added.

Her nonprofit, Youth Advocates for Change, seeks to validate people’s stories and experiences.

“I felt like I didn’t have the resources, and I wanted to create a platform where we can validate each other and impact one another,” Day said. “The second you are invalidated, it crushes you.”

If there was anything 17-year old Tiana Day could tell her younger self, it would be to “always trust your gut instincts, be open to growth, and be open to learning.”